We went around several European cities looking for murals and graffiti (Valencia, Cannes, Lyon, Berlin, Sesto San Giovanni ...) and it seemed that in this respect Milan was a scene a bit poor for street art.
The wonderful project of MAUA, Museum of Augmented Urban Art, has arrived to make us change our minds and remove ourselves from guilty ignorance.
Involving residents of the districts, students, photographers, associations, non-profit organizations, the project, thanks to the "Bando alle periferie" of the City of Milan, has surveyed, photographed and mapped over 160 street art works in five suburban areas of Milan: Giambellino- Lorenteggio, Adriano-Padova-Rizzoli, Corvetto-Chiaravalle-Porto di Mare, Niguarda-Bovisa and QT8-Gallaratese. 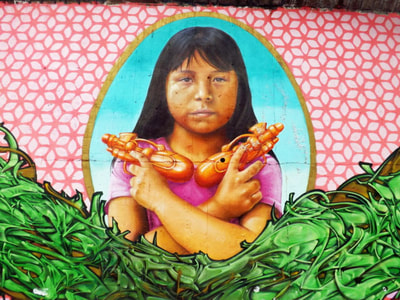 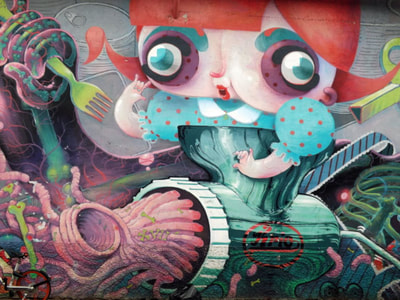 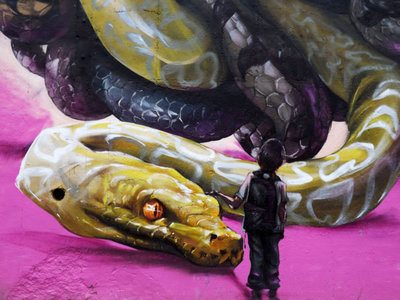 The operation has gone further, adding creativity to creativity: the students participating in the project, after training workshops, have become digital artists: starting from the works painted on the walls, they have created digital animations visible by downloading the Bepart app on phone or tablet and framing the work.
Bepart now offers guided tours in the various districts with a cost of 12 euros per participant during which, on foot or using public transport, the streets of the city are turned along itineraries that lead to discover works otherwise difficult to find, hidden in suburban streets and little frequented. In addition to the individual works, there are also large halls of fame, real open air galleries (or museums), where sequences of paintings are lined up in an evocative way. You will discover a hidden and unexpected Milan full of imagination, creativity and color and you may be led to think that authentic contemporary art is on the street more than in the abstract ruminations exhibited in museums. As far as we are concerned, we already think that the iconography of contemporaneity is graffiti art, and that the scholars of the future will understand more about our age by examining the memory of these graphic signs rather than certain abstruse and solipsistic museum works.
We participated in a first pioneering guided tour in the itinerary called "Padova", accompanied by art critic Chiara Canali and Giovanni Franchina and Joris Jaccarino di Bepart.
For a walking tour lasting more than three hours, the chosen day proved to be ideal, in a perfect storm, with icy wind, sleet and very cold temperatures: the members were equipped as for a polar expedition. The route followed by the Sondrio underground stop, along the central station, crossing the Naviglio Martesana, with a detour towards the Leocanvallo, then cross Viale Monza continuing towards Via Padova. Apart from the area of ​​Leocanvallo, which we already knew, the tour was an opportunity to discover new works (including the "animated" ones by Krio, Sfiggy + Ale Puro, Raptuz, Hombre Suk, Mr. Di Maggio, HNRX, Irwin , Sef.01 + Hadok), but specially two remarkable halls of fame, respectively in Via Zuretti (on a building behind there is even a mural painted with 3D technique) and a long stretch of Via Pontano under the raised section of railway that climb over Viale Monza. Here, on walls made available to writers, graffiti artists and muralists by the City of Milan, along the road and under bridges, dozens of artists have composed an extraordinary parade of works, created with styles that are very different from each other.
While Chiara Canali illustrated the birth and evolution of street art, the styles, themes, techniques used by the various authors, satisfying the curiosity of the participants, we were all busy, as well as watching and listening, taking photographs and to animate the paintings with the app downloaded on mobile phones (when the excessive cold does not send them crashing ...).
The works are reproduced on a splendid catalog published by Terre di mezzo: the catalog also has the gift of interactivity, and framing the pages with your mobile phone you can comfortably enjoy fifty animated images at your own home. The catalog is introduced by Chiara Bernasconi, assistant director in digital media at the MoMA in New York, and collects essays and single presentations of each district, of the Milanese street art and of individual works. It costs 12 and a half euros, and, we can assure you, it is an extraordinarily low price for a truly really beautiful book. 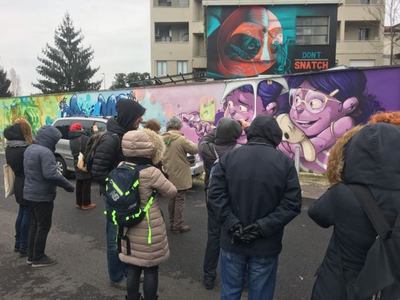 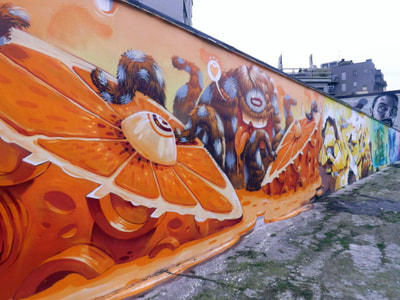 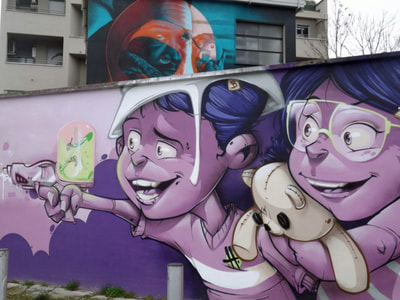 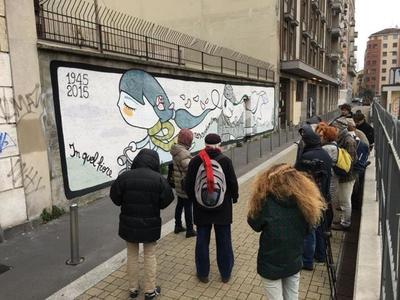